Starting from SyncMate version 4.x, you can sync not only contacts and calendars between your Mac and Google account, but also images/videos/music and folders between Mac and Google Drive storage.

To achieve it, just establish connection with your Google account (as described here) and choose “Pictures, Videos & Music” plugin from SyncMate’s plugins list.

Now your Mac’s images/videos/music and folders can be synced between Mac and Google Drive storage:

It is also possible to mount Google Drive storage as Mac disc.

To mount Google Drive as a disk, establish connection with your Google account (as described here) and switch to “Mount disk” plugin in SyncMate’s plugins list. 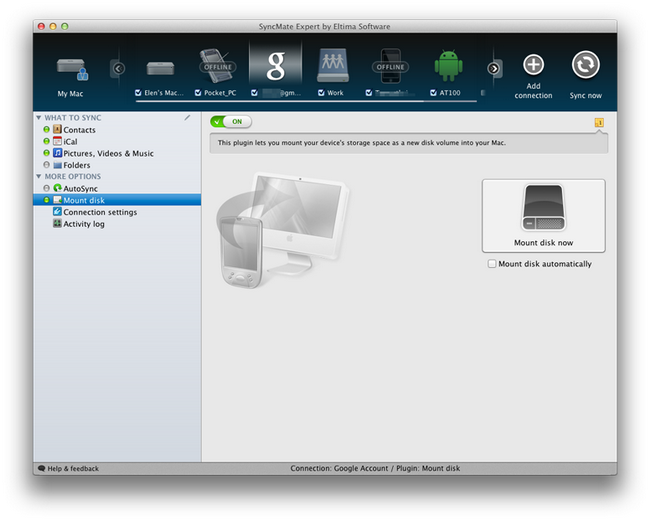 1. Tick “Mount disk automatically” checkbox if you want your Google Drive to be automatically mounted as a new volume on your Mac each time connection with it is established in future.

3. Now your Google Drive folder appears on your Mac and you can freely browse through it and perform any actions you need as if you were working with a local volume.

4. Now you are ready to synchronize:

Was this article helpful?
No Yes
We're sorry this wasn't helpful.
Can you tell us how this article could have been better?