SyncMate allows you to synchronize with iPhone, iPad and iPod Touch (hereinafter iOS devices) connected to your Mac via USB cable.

SyncMate is compatible with iOS 3, 4, 5 and 6 running devices.

See the full list of synchronization options for the above mentioned iOS devices:

Here are some sync peculiarities for iOS devices:

When syncing Mac with iOS devices, you can:

4. sync folders with images and iPhoto albums (only images) from device to Mac (iPhoto plugin).

1. On your Mac, Open iTunes.
Note: You should download and install the latest version of iTunes.
2. Connect the iOS device to your computer via USB cable and select it in iTunes under Devices on the left-hand side.
3. Select the content tabs. Some tabs may not appear if you do not have the corresponding content in your device library. 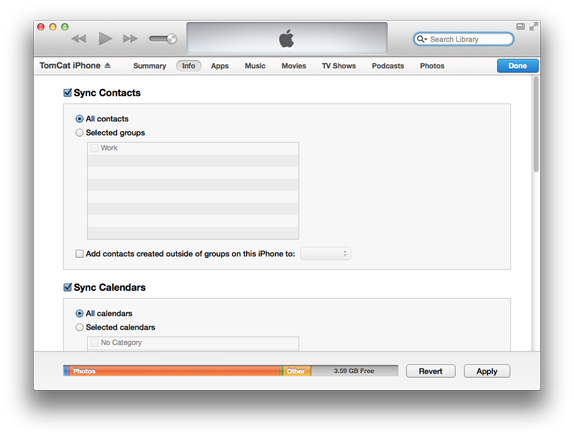 4. Click Apply, in the lower-right corner of the screen, to sync.
Read “Syncing with iTunes” in detail here: http://support.apple.com/kb/HT1386

After that, you can exit iTunes, but leave the content tabs checked. Now you can use SyncMate to sync your iOS device connected to your Mac via USB cable.