Some settings of bundled ports can be controlled and modified manually. 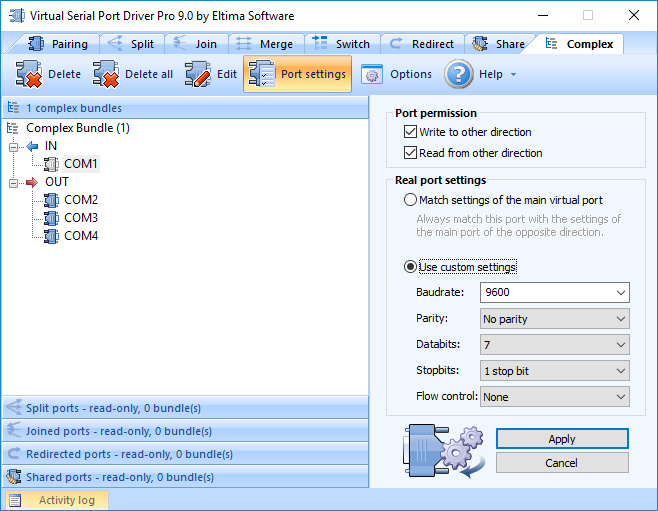 1. You can specify permission rights to allow or prohibit a real (or virtual) port from writing to or reading from the other direction (when splitting and joining ports or redirecting serial traffic).

2. You can match settings of the main virtual port or use custom ones:

If you select the “Match settings of the main virtual port” option, make sure you have set the remote port as the main one. This option can be useful if you want to open a real serial port with exactly the same settings as a virtual one.

3. Alternatively, you can use custom settings. This option allows custom configuration of real port settings, including:

Baudrate is the number of symbol changes made to the transmission medium per second using a digitally modulated signal or a line code. It is measured in baud (Bd).

As an option, you can set custom baud rate parameters by placing a mouse cursor anywhere inside this field and clicking the “Backspace” button.

Parity is a method of detecting transmission errors. An extra data bit is sent with each data character, arranged so that the number of 1 bits in each character is always odd or always even. If parity is correct, there has been an even number of errors.

No parity: means that there hasn’t been sent any parity bits. Error detection is handled by a communication protocol.

Odd: at least one state transition occurs in each character, which makes it more reliable.
Even: a parity bit is set to 1 if the number of ones in a given set of bits is odd.

Space: parity, likewise “Mark”, always sends the parity bit in the space signal condition.
The default value is “No parity”.

Flow control is a signal in the interface to pause and re-establish data transmission.
Possible values are: “None”, “Hardware”, “Xon/Xoff”. Default value is “None”.

Hardware: applies handshaking with a serial port to indicate that data transfer should be paused.

Xon: signals the sender that the receiver is ready to get more data.

Xoff: signals the sender to stop transmitting characters until the receiver is ready again.

Note: If you have faced any issues while transmitting data via ports used by VSPD PRO, with Flow Control set to Xon/Xoff, please, contact us at support@eltima.com and describe the issue in detail.


Was this article helpful?
No Yes
We're sorry this wasn't helpful.
Can you tell us how this article could have been better?