button in the upper right corner of Main window (or go to Main Menu –> File –> Convert into FLA). In the invoked window click

The following groups of options are available in “Convert” dialog window: 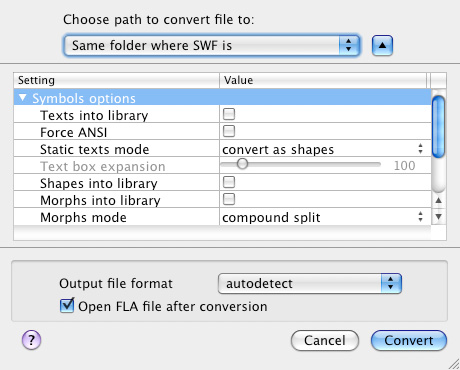 This option allows converting texts as symbol instead of placing them on timeline.

If this option is enabled Flash Decompiler attempts to use heuristic method to fix a bug in Adobe Flash MX (6.0). Adobe claims that it uses text in Unicode-16 (2 bytes for a character) format, meantime Cyrillic text, for instance, is represented as ISO 8859 code (8-bit per character), and, therefore, there could be some problems with text representation in the resulting FLA file. This bug is applicable to Central European, East European and several other encodings.

If you select the first option, then all static text from a SWF file will be directly converted into a FLA file as static text fields. The advantage of this method is that you can easily edit this text later on. However, if there is no character map for these characters, a problem may arise. In this case you may see question marks instead of your text.

Alternatively, you can convert static text as shapes if you select the second option. This method guarantees you that all static texts will be present in FLA file in readable format but they will not be easy to edit.

Quite often when converting static text you may discover the problem that the resulting text is few pixels bigger than the original one. Adobe Flash doesn’t insert “New Line” character automatically. As the result, text doesn’t fit into the bounds and is slightly slid. “Text box expansion” option simply extends bounding box size by the number of twips you specify with the slider.

This checkbox enables/disables placement of all shapes into a separate folder instead of placing into the corresponding frame. Generally, it may be more convenient, especially, when a shape appears only 1 time.

Morphs into Library checkbox enables/disables placement of all morphs into a separate FLA library and timeline after decompilation. Being placed into the FLA library, the morph is converted into a movie clip, which contains the morph of the correct time length. If this option is not enabled, morph will be placed into the corresponding frame without adding it to the library.

“Flat” mode is the quickest and simplest one. The mode doesn’t consider that the resulting morph is 1 frame shorter than the original one. The quality of the small morphs can be significantly affected.

“Split” mode tries to fix the problem with morph’s length. The resulting morph will be 1 frame longer and the frame that comes behind the previous one is placed on a separate layer. As the result, each morph is layered, and new layers may be added in FLA. This may make FLA file grow in size.

“Compound split” mode, as well as “Split” one, resolves the problem with morph length, however the second layer will only contain the data that prevents the morph from being prolonged. A new layer is added only when it is needed.

Please, note that only this mode is available if “Morphs into library” option is disabled.

This group of options defines the motion tweening detector settings.

Motion tweening is a process of generating intermediate frames between two different states of an object. It produces transposition effect when the first object state evolves smoothly into the second one.

This checkbox enables/disables motion tweening conversion. If this option is disabled, all of the settings below will be ignored.

This option defines the algorithm sensitivity and represents a deviation from imaginable motion trajectory in percent. It can highly affect the resulting movie quality:

1. If you set deviation value small enough, the motion tween may not be recognized at all, or recognized as several sequential tweens.

2. If deviation is too high, there may be flaws in the resulting FLA file, where some objects will not follow the path correctly and produce quirky movements.

Length factor defines dependence of conversion sensitivity from the length of the motion tween.