Instead of placing all FLA objects directly into the root of the movie, you may sort them out and group into separate FLA library. The major advantage this method delivers is that you may easily navigate though objects tree and find the desired in corresponding group. This is especially apparent if FLA file contains a lot of objects. 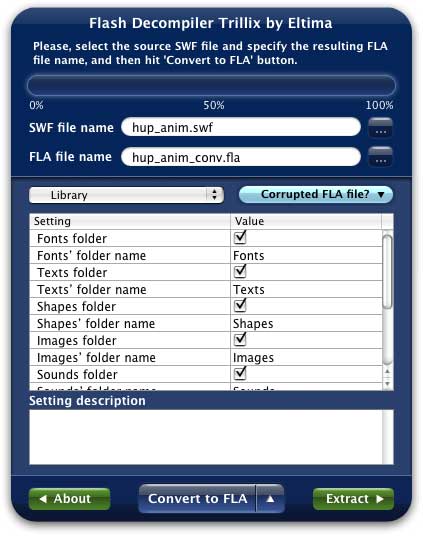 You may create groups in FLA library for the following Flash objects: Fonts, Texts, Shapes, Images, Sounds, Morphs, Buttons and Sprites. SWF to FLA Converter for Mac allows you to specify folder’s name for each of the mentioned object, however, to avoid any problem with fonts’ conversion we advise you to name those folders using Latin characters only.

By default, all groups will be created and will have corresponding folder names (for instance, Sound objects will be stored in Sounds folder).